"Go your way, oh monks, for the benefit and happiness of many, out of compassion for the world, for the good, the benefit and the happiness of gods and men. That two do not go in the same direction. Teach, oh monks, the Dhamma, which is beneficial in its beginning, in its middle and in its end, both in the spirit and in the letter of it. Make known the Noble Life, which is fully complete (with nothing to add)and pure (with nothing to take away). There are beings with only a little dust in their eyes, they will be lost unless they hear the Dhamma. Such people will understand the truth".

The Nine Palaces are considered the main nine areas in life.

2600 Sets like this have been manufactured, with two small statues of the Buddha, one of them 26cm tall and another one 20 cm tall, in a limited edition, that is numbered and unique. They have been blessed by Buddhist monks from Myanmar as well as by different temples from Buddhist countries that take part in the sacralization process of “The Holy Land of the City of Cáceres” 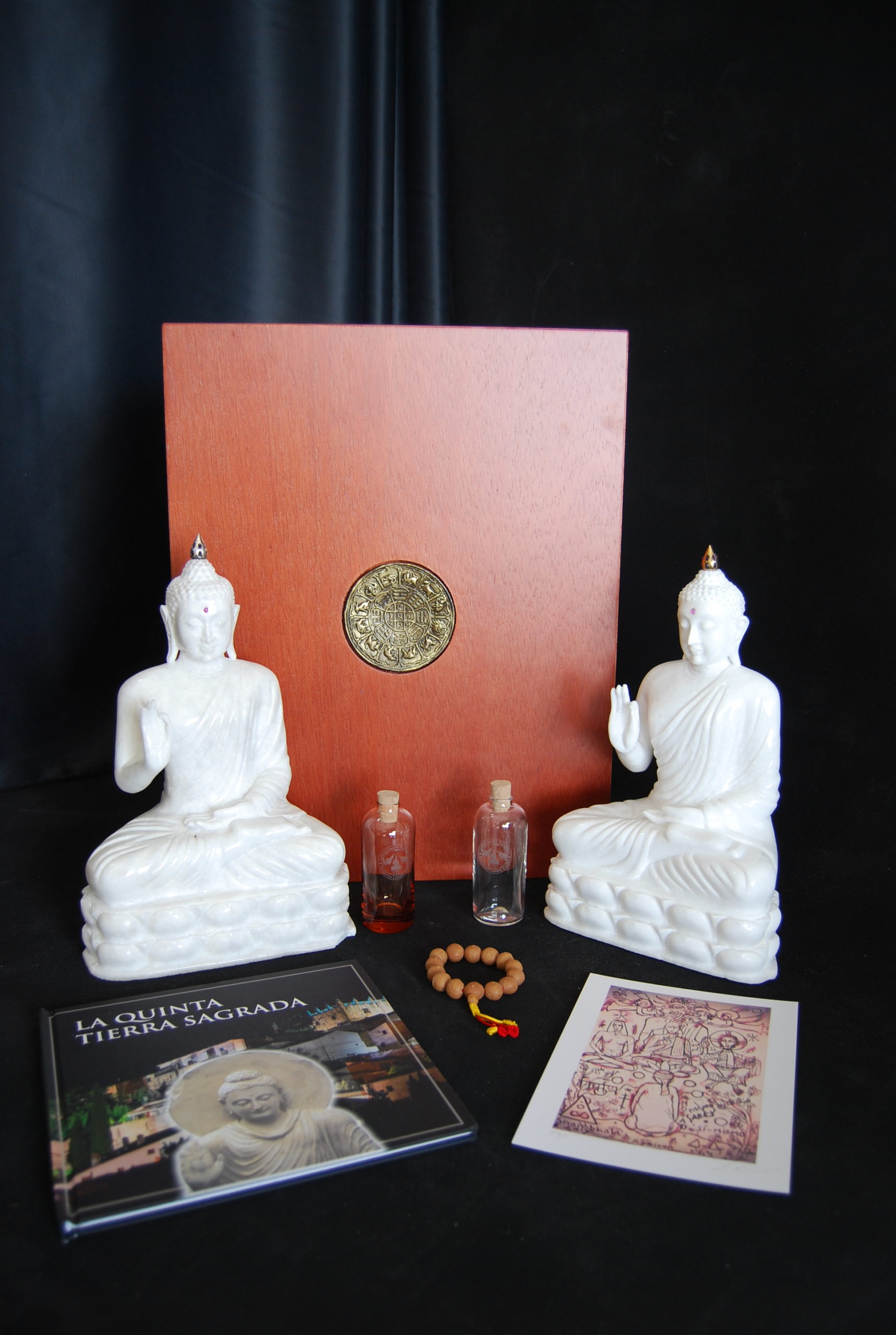 Often times the iconographic representations of the Buddhas/ Bodhisattas/ Bodhisattvas are displayed in certain ritualistic position showing different arrangements of his hands.

Such hand arrangements are commonly known as “mudras”. Among all the different “mudras” we can see in these figures, the one called Vitarka is easily recognizable in several of them. It represents the explanation and conveyance of Teachings –The Dhamma/Dharma–, that arrives to men by the sheer compassion of the Buddha; by means of his immense compassion towards human beings. It is also interpreted as the hand gesture that causes the energy of the Teachings, so that they would be able to convey ideas even without the use of words.

The acquisition of this two item set.

Entitles the purchaser the right to have a niche in the temple which will be built at the base of the statue of the Great Buddha in Cáceres, Spain. Such temple will hold one of the most peculiar spaces in the whole architectural complex; it is designed to hold the original relics of the Buddha which will be sent from Nepal following the agreement that was made with the city of Ramgram (the former Rāmagāma mentioned in the canonic scriptures). The mound designed to that object will be surrounded by rows of niches as a respectful tribute of veneration. These niches will also be used as columbarium. The purchaser will not only be able to lay their 20cm Buddha piece but also their own mortal remains or those of whom they may consider appropriate. Both the figures and the ashes will lay there for life, in the most relevant sacred land for Buddhism outside Asia.

The Chakra of Protection.

The wooden box that holds the two Buddha figures is presided by one of the most important symbols of protection in the Vajrayāna Buddhist tradition and it’s the result of the magic mix of Chinese and Tibetan cultures. It actually is the Thangka Tancheng Protection Wheel or chackra, used in the most relevant ceremonies as a talisman to placate bad energies and cast out evil spirits.

It is said that the central wheel, the Jiugong Bagua Pai, corresponds to the Wheel of the Nine Palaces and Eight Trigrams from Manjursi, the embodiment of Buddha’s wisdom, that was designed by the very Padmasambhava (Gurú Rimpoché), founder of the Tibetan School of tantric Buddhism towards the seventh century.

The Wheel is split into three circles. The central circle displays a grid that divides it into nine spaces or palaces in the form of the divisions in a tortoise’s shell. There is a key word in each palace colored in red, yellow, white, green, black and blue that represents the seasons in the Tibetan calendar. 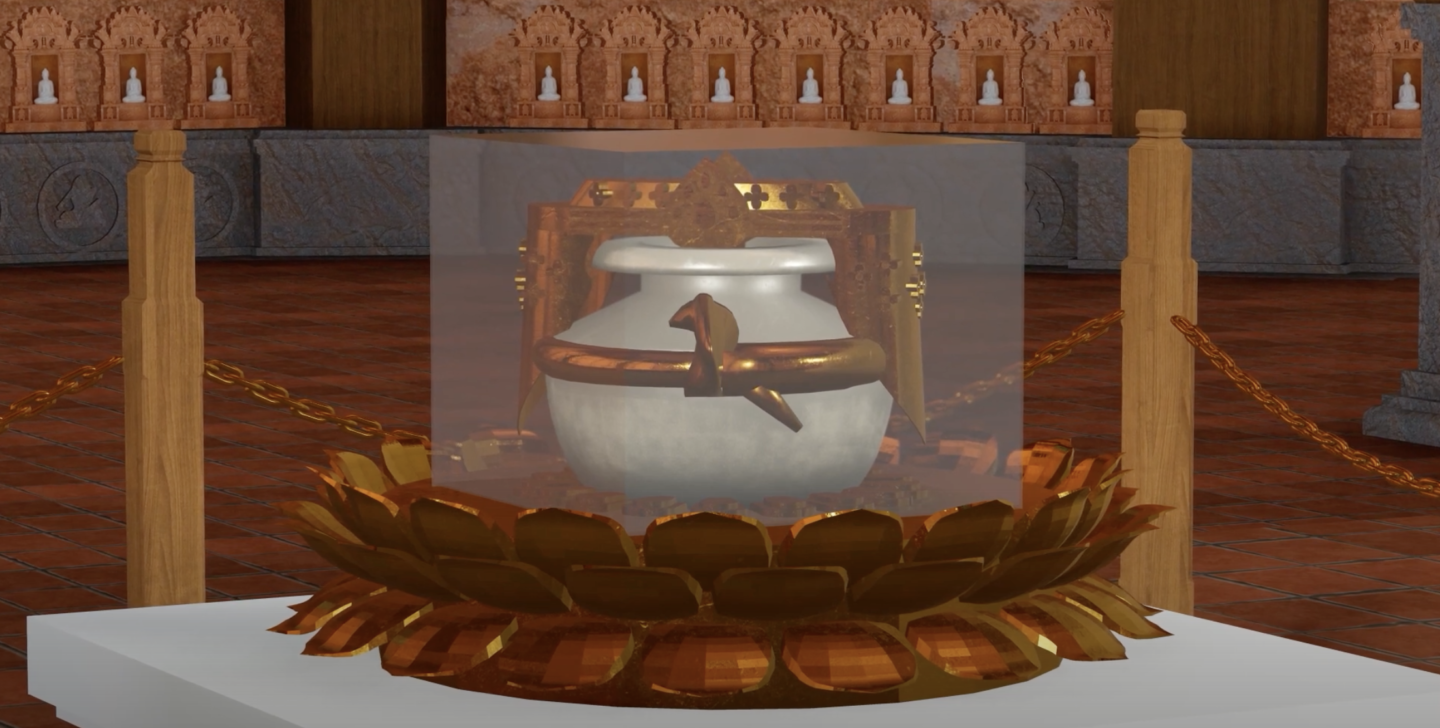 Earths of Lumbini and Cáceres.

The two glass vials contain sacred earth from the cities of Lumbini and Cáceres. Lumbini is located in Southern Nepal, very near the border with India. It is a sacred place and a place of pilgrimage, since it is the Buddha’s birthplace. Its archeological heritage holds a stone that marks the place where he was born. It was declared a World Heritage city by UNESCO in 1997. Cáceres is a Spanish city and municipality, located in the center of the Autonomous Region of Extremadura. The city of Cáceres boasts the title of World Heritage awarded by UNESCO since 1986, due to the fact that it is one of the most comprehensive urban settings from the Middle Ages and the Renaissance.

Means necklace or string of beads threaded onto a string in a sort of necklace or bracelet.

The word in Sanskrit mala means necklace or string of beads threaded onto a string in a sort of necklace or bracelet. The malas were used to keep track while reciting, you sing or mentally repeat a mantra or the name or names of a deity. The mala is comprised of 108 beads. There are numerous explanations as to the reason for that specific number, and the special religious meaning that several Hindu, Buddhist and Jainist traditions have for that number. For example, in the traditional Hindu thinking it is commonly said that people have 108 afflictions. In another calculation, 108 is the number of possible dharmas or phenomenon. The number itself has remained constant along centuries of practice.

The Set you are acquiring

The two Buddha figures in white jade and all the significant gifts displayed alongside– will contribute in essential ways to the building and development of the largest Western Buddhist center in the first Sacred land outside Asia, under the protection and inspiration of the great Buddha Mahā Karuṇā, world symbol of Peace. 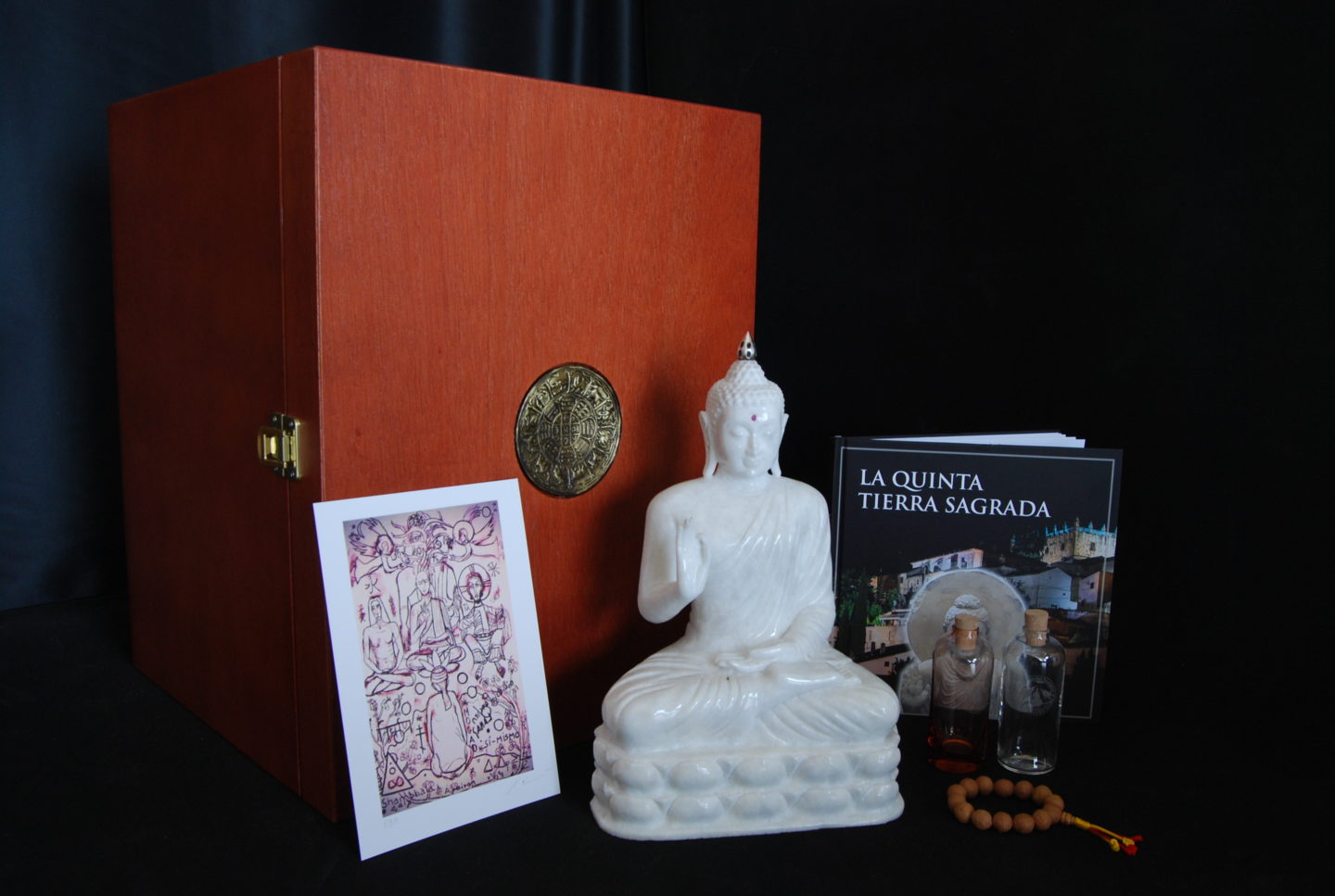 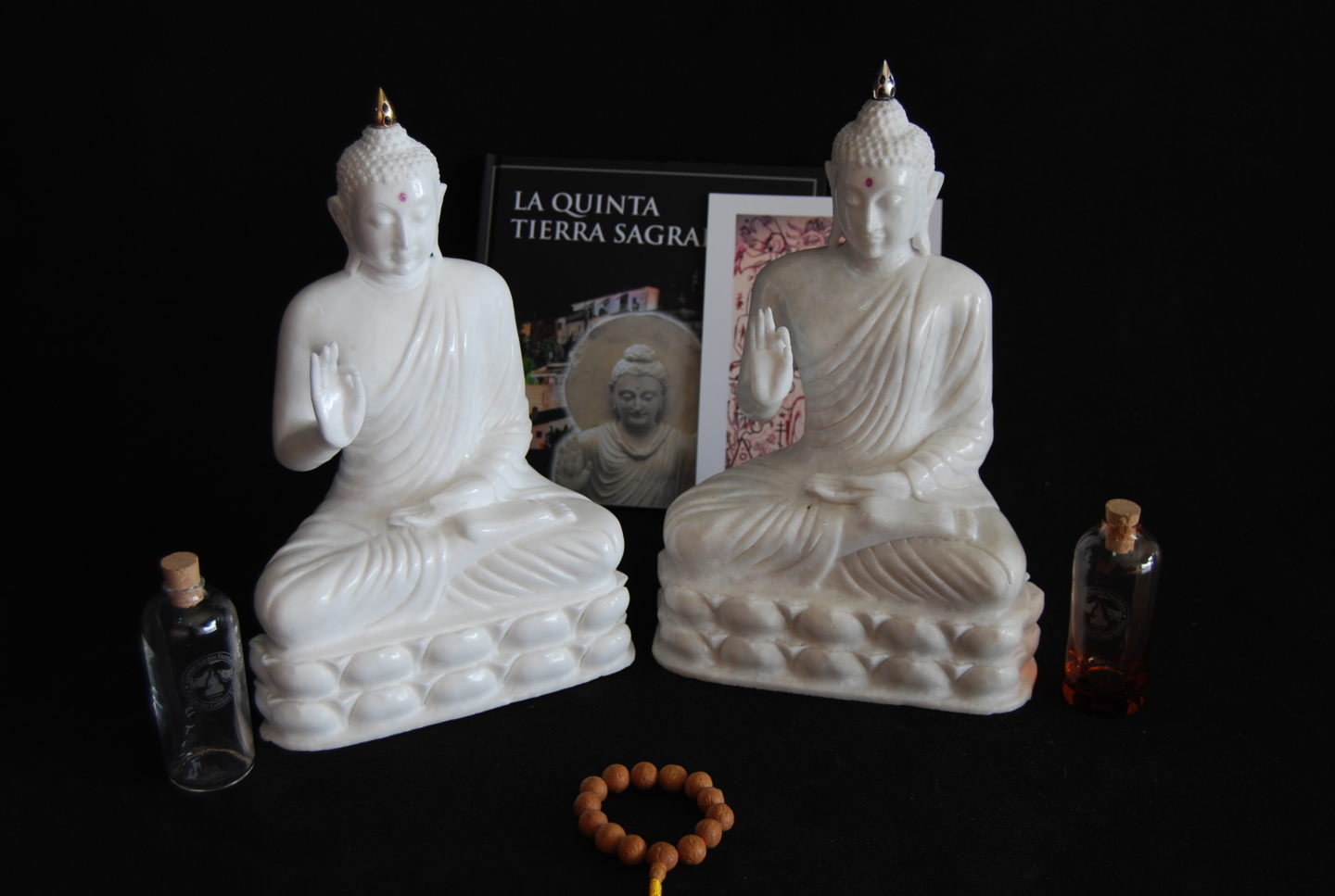 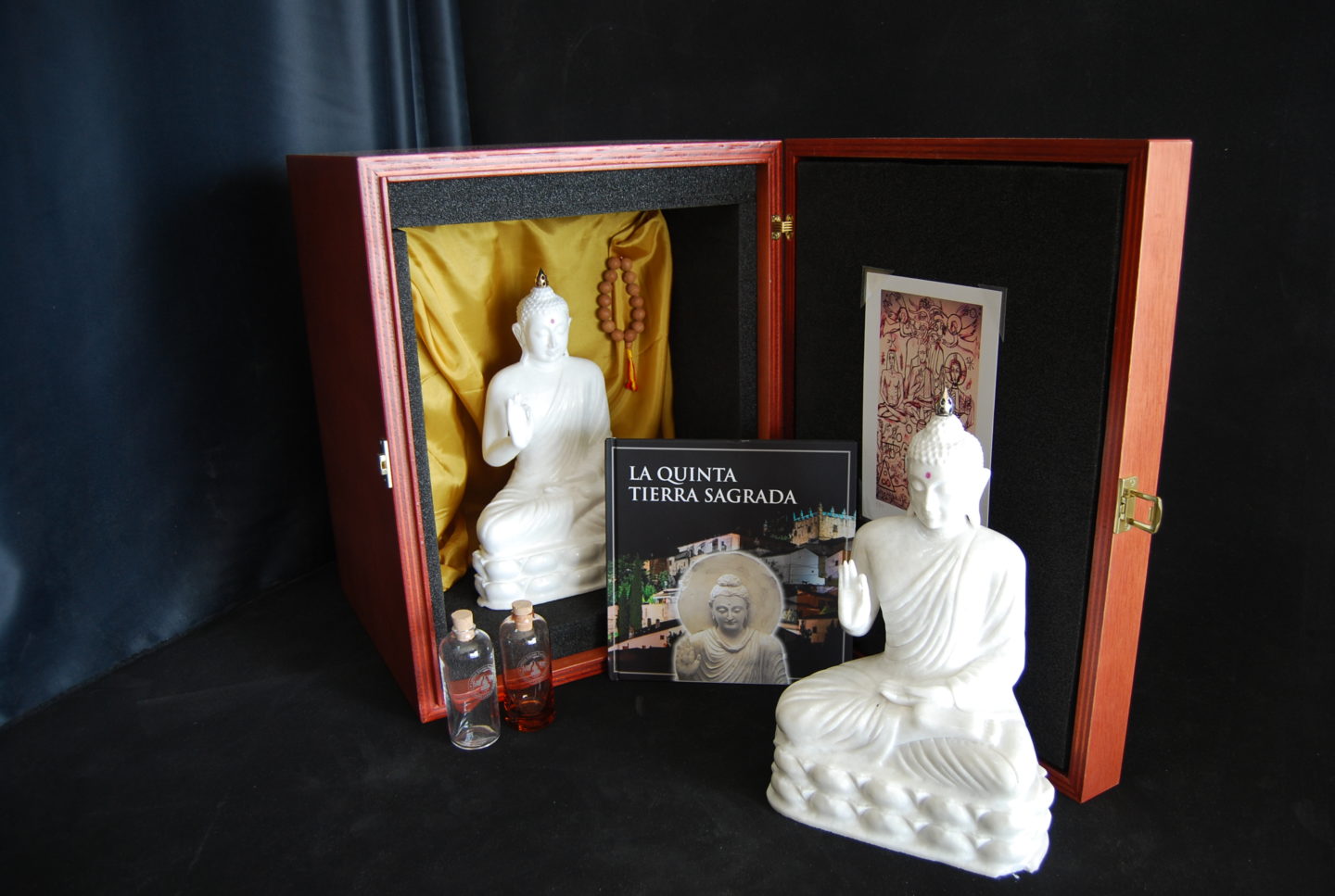 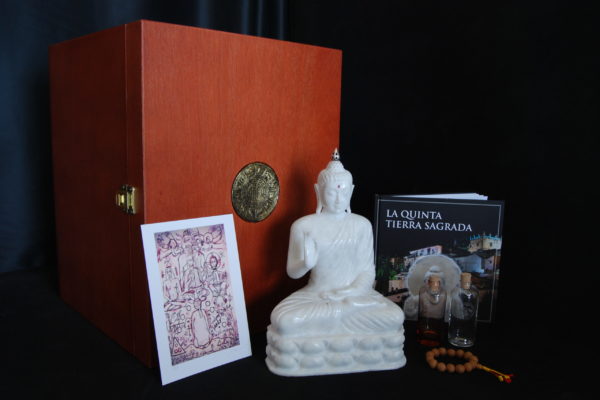 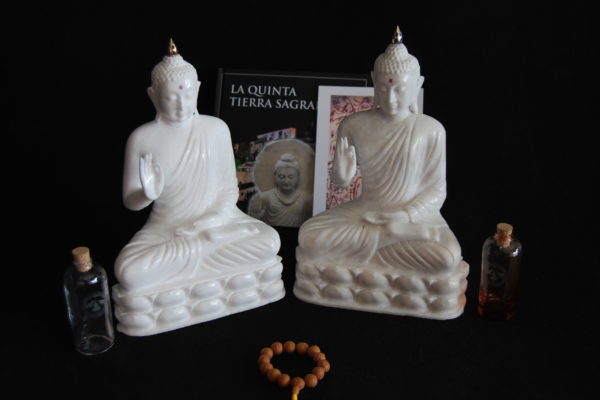 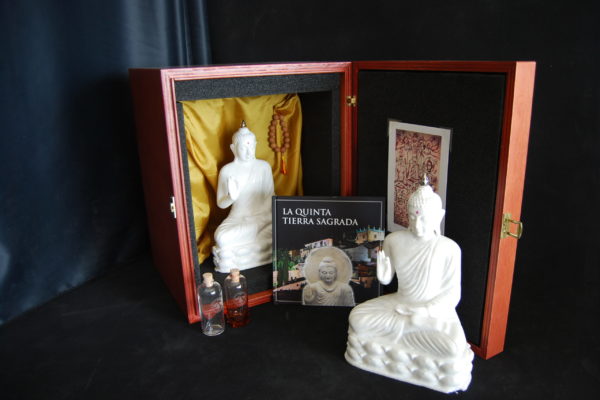