Through steady action, we will ensure
a bright future for our beautiful planet.

“Karuna is the enlightened being is a reflective and compassionate being, a being away from the self and the intellect, and based on the foundations of integral love, AHIMSA, which advances towards the knowledge of reality through love and compassion”.

In Theravāda Buddhism, karuṇā is one of the four "divine abodes" (brahmavihāra), along with loving kindness (Pāli: mettā), sympathetic joy (mudita) and equanimity (upekkha). In the Pali canon, the Buddha recommends cultivating these four virtuous mental states to both householders and monastics. When one develops these four states, the Buddha counsels radiating them in all directions, as in the following stock canonical phrase regarding karuṇā:
He keeps pervading the first direction, as well as the second direction, the third, and the fourth with an awareness imbued with compassion. Thus he keeps pervading above, below and all around, everywhere and in every respect the all encompassing cosmos with an awareness imbued with compassion: abundant, expansive, immeasurable, free from hostility, free from ill will. Such a practice purifies one's mind, avoids evil induced consequences, leads to happiness in one's present life and, if there is a future karmic rebirth, it will be in a heavenly realm. The Pali commentaries distinguish between karuṇā and mettā in the following complementary manner: Karuna is the desire to remove harm and suffering (ahita-dukkha- apanaya-kāmatā) from others; while mettā is the desire to bring about the well-being and happiness (hita-sukha-upanaya-kāmatā) of others. The "far enemy" of karuṇā is cruelty, a mind-state in obvious opposition. The "near enemy" (quality which superficially resembles karuṇā but is in fact more subtly in opposition to it), is (sentimental) pity: here too one wants to remove suffering, but for a partly selfish reason hence not the pure motivation. In the Pali Canon, buddhas are also described as choosing to teach "out of compassion for beings." 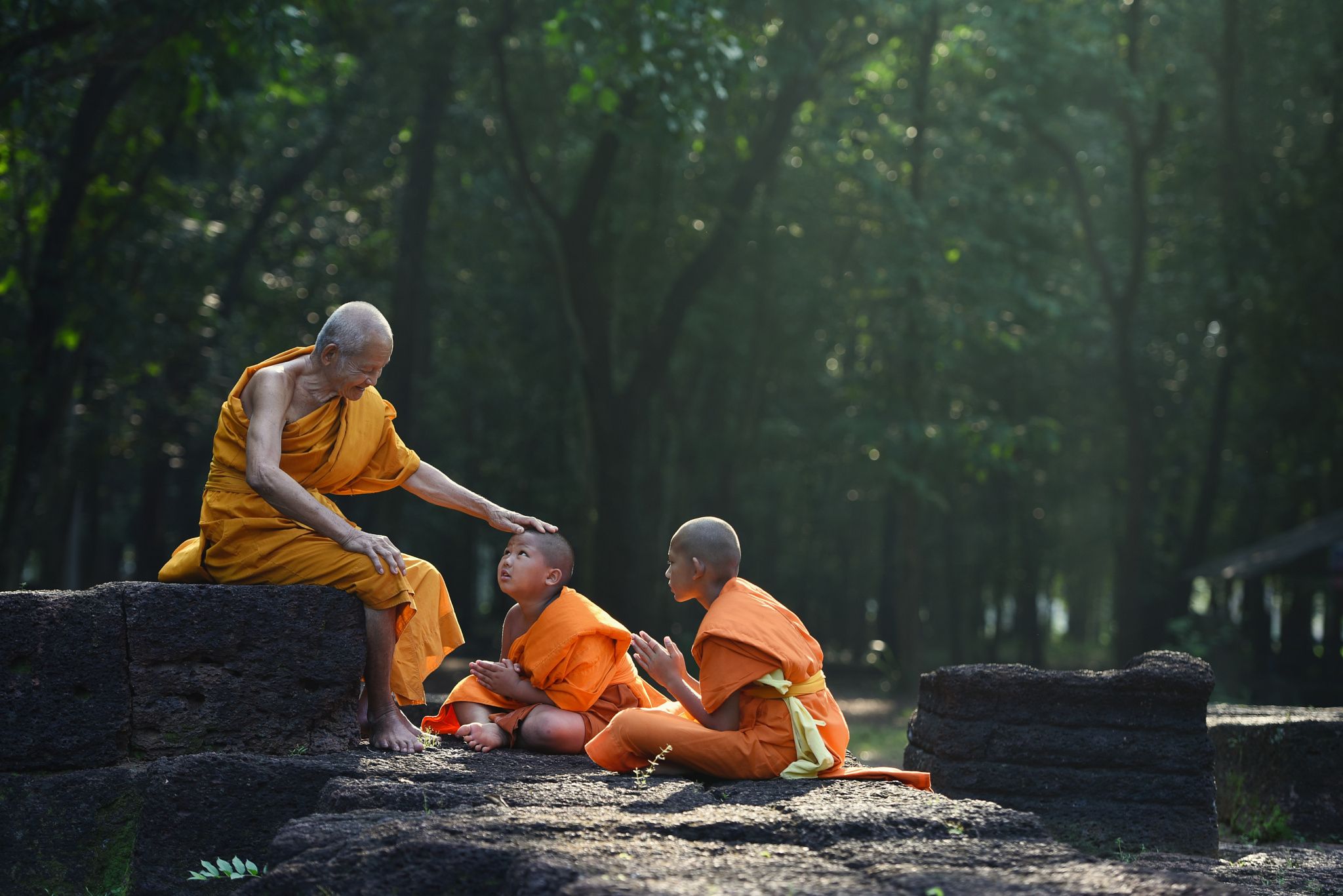 Karuṇā is important in all schools of Buddhism. For Theravada Buddhists, dwelling in karuṇā is a means for attaining a happy present life and heavenly rebirth. For Mahāyāna Buddhists, karuṇā is a corequisite for becoming a Bodhisattva.

(Pāli: mettā)
along with loving kindness

In Mahāyāna Buddhism, karuṇā is one of the two qualities, along with enlightened wisdom (Sanskrit: prajña), to be cultivated onthe bodhisattva path. 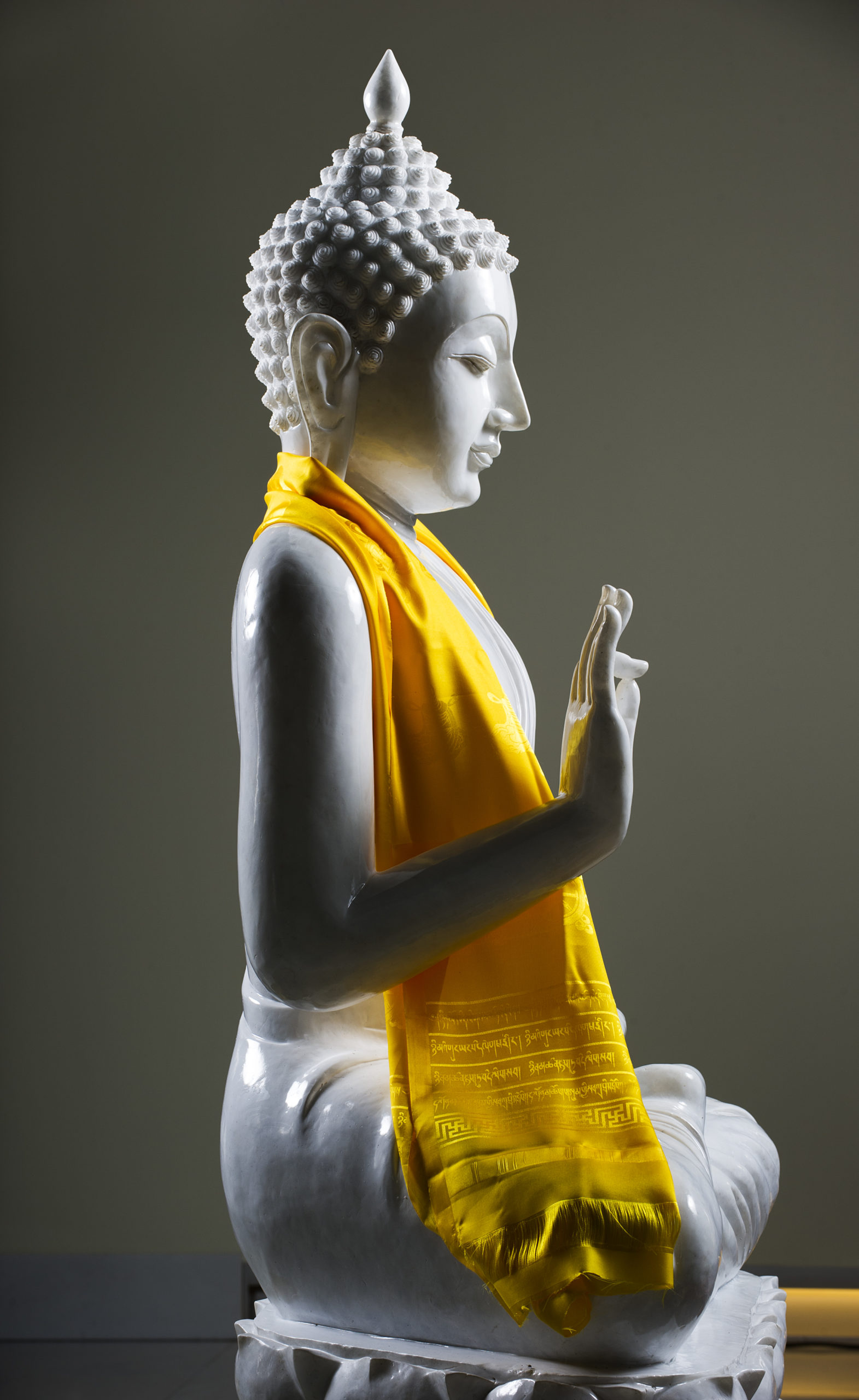 According to scholar Rupert Gethin, this elevation of karuṇā to the status is one of the distinguishing factors between the Theravāda arahant ideal and the Mahāyāna bodhisattva ideal:
For the Mahāyāna, the path to arhatship appears tainted with a residual selfishness since it lacks the motivation of the great compassion (mahākaruṇā) of the bodhisattva, and ultimately the only legitimate way of Buddhist practice is the bodhisattva path. Throughout the Mahāyāna world, Avalokiteśvara (Sanskrit; Chinese: Guan Yin; Japanese: Kannon; Tibetan: Chenrezig) is a bodhisattva who embodies karuṇā.
In the Intermediate section of the Stages of Meditation by Kamalaśīla, he writes:
Moved by compassion [karunā], Bodhisattvas take the vow to liberate all sentient beings. Then by overcoming their self-centered outlook, they engage eagerly and continuously in the very difficult practices of accumulating merit and insight. Having entered into this practice, they will certainly complete the collection of merit and insight. Accomplishing the accumulation of merit and insight is like having omniscience itself in the palm of your hand. Therefore, since compassion is the only root of omniscience, you should become familiar with this practice from the very beginning.

In Vajrayana Buddhism, one of the foremost authoritative texts on the Bodhisattva path is the Bodhisattvacaryāvatāra by Shantideva. In the eighth section entitled Meditative Concentration, Shantideva describes meditation on Karunā as thus:
Strive at first to meditate upon the sameness of yourself and others. In joy and sorrow all are equal; Thus be guardian of all, as of yourself. The hand and other limbs are many and distinct, but all are one, the body to kept and guarded. Likewise, different beings, in their joys and sorrows, are, like me, all one in wanting happiness. This pain of mine does not afflict or cause discomfort to another's body, and yet this pain is hard for me to bear because I cling and take it for my own. And other beings' pain I do not feel, and yet, because I take them for myself, their suffering is mine and therefore hard to bear. And therefore I'll dispel the pain of others, for it is simply pain, just like my own. And others I will aid and benefit, for they are living beings, like my body. Since I and other beings both, in wanting happiness, are equal and alike, what difference is there to distinguish us, that I should strive to have my bliss alone? 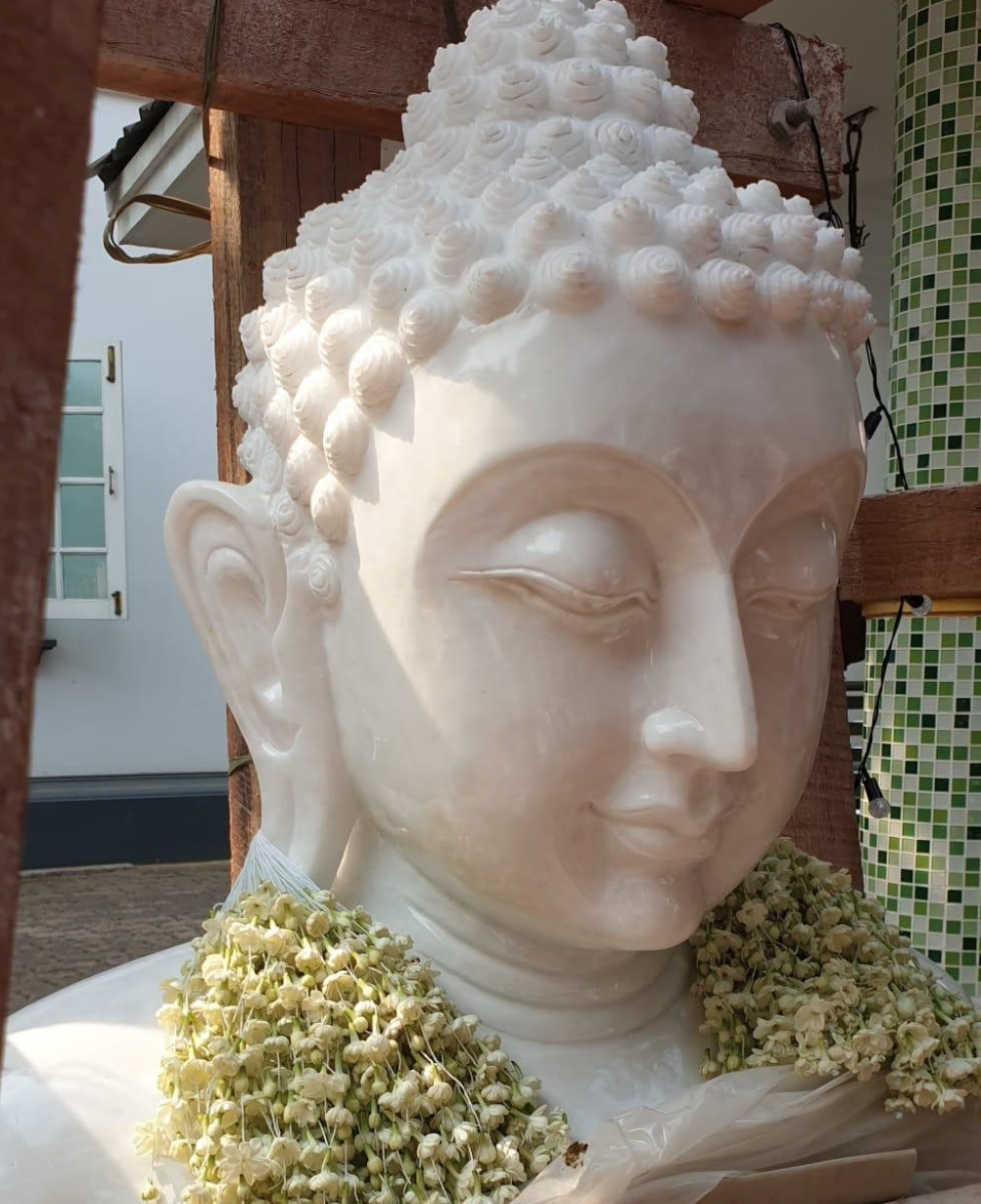 The Clock Building at the Port of Valencia exhibited the Buddha of the Lumbini Foundation before travelling to Cáceres.

The sculpture of Maha Karuna Buddha arrived at the Port of Valencia last August 2020, from Myanmar. It is a gift that the Lumbini Garden Foundation is making to the city of Cáceres, where it will invest 72 million euros to build the largest Buddhist centre in Europe.

Towards the Buddha from the west. A journey of 3.000 years has begun it's way to Cáceres.

There is a type of trip that emanates from the inner need of oneself, (Holy Land, Camino de Santiago, Kumano Kodo), they are examples of this. In these trips, it does not matter if you are from one religion or another or none, they have the peculiarity of making us travel internally.